Yes, you can now mark all articles above or below current one as read!

There are several ways you can do it. There are new items in “Mark all as read” menu:

There are keyboard shortcuts: 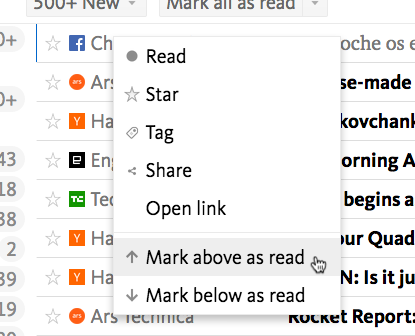 Marking above or below as read works everywhere: feeds, starred or tagged items, smart streams, comments and search in everything referred above. And it doesn’t just mark loaded articles: marking below as read marks everthing till the end of the feed no matter loaded or not. So you can quicly dismiss older articles if you don’t want to read them.

Since BazQux Reader has comments this feature turned out to be much more complex than expected. For example, comments in already read (and not visible) articles are marked as read too (like “Mark all as read” does) so they don’t surprise you when you change view mode. And of course there are many corner cases in marking above or below from comment (hope that I handled them all ;).

As a side effect, “Mark all as read” now works in “Starred items” and “Tags” too (was silently ignored previously).

And there are options to unstar or untag above or below when you’re in starred or tagged items feed.

Right click (long tap on mobile) on article headers in list view or on preview images in mosaic or magazine view to show article menu. On mobile you could use right-to-left swipe. On desktop you could right click at the bottom of the article or between blue cursor and article text.

It solves years long problem of saving and sharing in the middle of the article. It’s especially handy on mobile where almost any article is long enough to hide article buttons while you’re scrolling.

Tag and share buttons are no longer shown in articles on narrow mobile screen. It leaves more space for article titles and you could still tag and share via article menu.

This feature also turned out to be more complex than expected and led to a big rewrite in how unread numbers are counted. As a result unread numbers update faster, use less traffic and several nasty bugs were fixed.

Don’t know whether you’ve seen folder showing 1 unread item after all feeds in this folder were read but I’ve tried to get rid of this for years and now it finally fixed! Negative unread counts after “Skip” or “Ignore” in smart streams are also gone.

The more people use reader the more filters & smart streams they have. And when people have 200 smart streams working on 2000 feeds it’s time to optimize things a bit ;)

Smart streams and filters are now updated 2-4 times faster. It’s especially visible on first page load. Editing is faster too thanks to much less traffic used.

Year subscription now costs $30. I’ve increased price in March. Price stayed the same since 2014 and many features were added so I decided to increase it. BazQux Reader is still 2-3 times cheaper than other readers with comparable feature set.

Reader is profitable since 2014. There was a slow decline of a number of active users since 2014 till mid-2019. Now there’s growth in both active and new users (actually, there are more new users each year since 2017 but until 2019 it was not enough to offset churn of people coming from Google Reader Apocalypse of 2013).

But there’s growth in costs too. While server costs are roughly the same, other costs have increased. I have two daughters now (and waiting for a boy!), need to rent office so I can focus, need to rent bigger apartment. So I came to a point where BazQux earns me enough for living but not enough for growth of the service.

I think that reader is really cool now (many features are still missing, but the look and mobile interface are wonderful) and most competitors are either out of business or started asking money so it’s time to make more serious advertising and I need money for this.

Update (September, 2020): Twitter has unsuspended @BazQuxReader account. No communication about reasons but it works now and that’s good.

For some unknown reason Twitter has suspended @BazQuxReader account in May. I haven’t even used it for a couple weeks before this.

I’ve sent a request to Twitter to unsuspend account but 2.5 months passed and I still haven’t received any answer. If anybody is working at Twitter I would be grateful if you can help me in unsuspending @BazQuxReader account.

For reporting issues, please, mail support@bazqux.com or use Discourse community.