Hi, some new features were added to BazQux Reader.

You can now add articles to Pocket in one click without opening new browser tab: 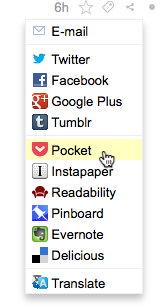 On the first click there will be an option to authorize to Pocket. After authorization next saves will be one-click.

It's now possible to chose data range in 'Mark all as read' menu. So you can mark only old articles as read. Very useful when there are too many posts in some blogs. 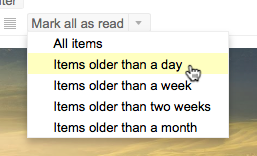 I've also added options to unsubscribe from all feeds and to delete account: 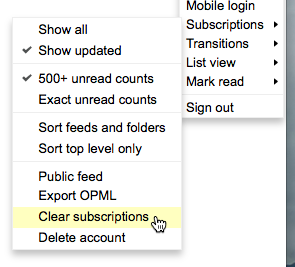 Besides subscriptions menu, delete account option is also added to the free trial expiration dialog. Privacy is very important aspect and while only 1/1000th of registered uses have requested account deletion I still implemented it.

There are few improvements in the feeds fetcher. Post contents are now updated when they're changed in the feed. And subscribers count is now reported to publishers in the User-Agent header.

But the most important thing I did is the automatic removing of unused feeds and accounts with expired free trials. That means I now need to fetch few times less feeds and use less servers. This also means that feeds from popular sites (that host many feeds but don't have real-time updates, like Reddit, Twitter, LiveJournal or Google News) are updated faster. Since most sites do not allow more than a few downloads per second I'm rate limiting my feeds fetcher and the lesser feeds I have, the smaller is the download queue and the faster are updates.

It's a great strength of paid only feed readers. Unlike in freemium products you don't pay for other's feeds (that's why I can afford to set the low $9/year price) and you get faster updates.

During past several months I've gradually reduced server costs 3 times. Now I'm using only 5 servers (although quite powerful ones). This means that even newly registered users alone are now covering most of the server costs. With 85% of weekly active users and 3 times less server costs I hope that this year's profits will be much better than previous one (most of them were spent on the servers).

Next thing planned is a big one. I'm going to add ability to apply filters or save them as a feed so it'll be possible to hide uninteresting posts and to monitor interesting ones.

Thank you for adding account deletion - even though I don't plan to delete my account it's really always good to have (plus it's actually required by law in EU).

Appreciate your continued work. I use BazQux daily and couldn't live without it.

Ho will be the filters be done? Could we have them as a "virtual feed" (Thinking something similar to RSSOWL filtering, where you could see x+y separate of the feed, but the items get marked as read in the unfiltered feed.)

Yes, I'm planning to have a "virtual feed" (smart feed? don't know how to call it yet) with the behavior you've described.

... how about a simple filter that just *highlights* items without zapping everything else.

It's already possible to filter items (but not possible to apply filter permanently or to make a separated feed from it). I'm not sure that highlighting is necessary.

perfect! thank you!
please up pocket to one level with tag and share icons

Yes, I'm planning to add an option to move sharing services buttons out of menu.

After importing my Google Reader feeds, I find I have hundreds of feeds, most of which I have no interest in after 10+ years. What I need is a bulk unsubscribe feature, either unsubscribe entire folders of organized feeds or a big page of all my feeds with checkboxes and mass-actions.

I might not be the only one, and it might help reduce your server load in the long run.

I'm planning to add bulk subscription edits. And deleting a folder is already possible. Right-click on folder and chose Unsubscribe.

When I right-click on a folder, I only get "Rename Folder", "Delete Folder", "Sort Folder", and "Public Feed". No Unsubscribe.

And there's also the question of what happens if there is an Unsubscribe for a folder and a feed in that folder is in multiple folders. Would it really unsubscribe that feed completely, or just delete that folder and unsubscribe all feeds in it that aren't also in other folders?

It will unsubscribe from all feeds in folder completely even if they're in multiple folders.

Ah, that's what I was afraid of. I'll have to be real careful, then. I'm a big user of folders to organize my feeds, but plenty of feeds are in multiple folders. A feed about Android Development would be in the folder Android and in the folder Development, for instance.

Thank you! Always happy to read such comments.